We have a team of professionals to help you with all your business needs. So, that you can focus on business expansion in Nepal.

Located between two huge countries with vibrant economies, China in the north and India in the east, south and west , Nepal is a landlocked country on the southern slope of the Himalayas. The country’s economy is based on tourism, agriculture, carpets, textiles and tea. Because of its geographical and historical reasons, Nepal does most of its trade with India. However, China and the United States are also trade partners of Nepal to some extent. Further, large scale commercial activity has hitherto been in the hands of foreigners, primarily Indians.

Nepal is located between two of the world’s most populous countries, India and China, with easy access to both countries vibrant markets. The country’s significant lower tariffs on imports make Nepal an attractive location for foreign investment. Natural as well as cultural assets of Nepal also offer a substantial opportunity to investors.

Though the country is small in size with limited market, but its special relationships with neighboring countries offers significant access to the largest markets in the region. The country has an easy access to the world market. Nepal is also a member of WTO thus getting benefits of global rule based multilateral trading arrangement.

Being a labor-surplus country, Nepal supplies unskilled, semiskilled, skilled and highly-skilled labor to various labor importing countries. Based on the classification of industry:

Nepal encourages foreign investment both as joint venture operations with Nepalese investors or as 100 per cent foreign-owned enterprises. With the intention to create social and economic systems that can provide reliable access to good-quality, the Government of Nepal (GON) is highly supportive of foreign investment. Moreover, through sustainable economic development, the country is working toward political stability, peace building, trade facilitation and economic capacity building.

New Industrial Policy of the country attracts the domestic and foreign investors by improving the industrial environment, increasing industrial production and productivity, creating more employment opportunities, substituting imports through the promotion of export based industries, improves Nepal’s balance of payment by minimizing the trade deficit.

In Comparison to other countries in South Asia, Nepal offers the lowest tax burden in the region. Some of the reasons for comparatively high ROI in Nepal.

There are several types of legal entities available in Nepal.

On the basis of incorporation:

Chartered company – Charter companies is established by the royal charter or a special sanction granted by the head of the state. Moreover, the East India company, Hudson’s bay are some examples of this type of company. However, now a days this type of company is no more popular.

On the basis of liability:

Unlimited company – In this type of companies, the liabilities of the members is unlimited like that of a partnership firm. However, if the assets of the company are not sufficient for satisfying the claims of the creditors, the shareholders are liable to pay more than the face or nominal value of shares held by them even from their personal property.

Company limited by shares – This type of company is registered under the provisions of the company act with a specific amount of share capital divided into a definite number of shares. The liability of the shareholders is limited to the extent of the face value of the shares they have paid. These days this type of companies are quite common.

On the basis of ownership:

Government companies – In this type of company, at least 51% of the paid up share capital is held by the government.

On the basis of number of members:

Private company – This type of company by its Memorandum Of Association, limits the number of its members not exceeding 50 and prohibits the sales of its shares to the general public. A private company must use the words private limited (Pvt. Ltd.) in its name. 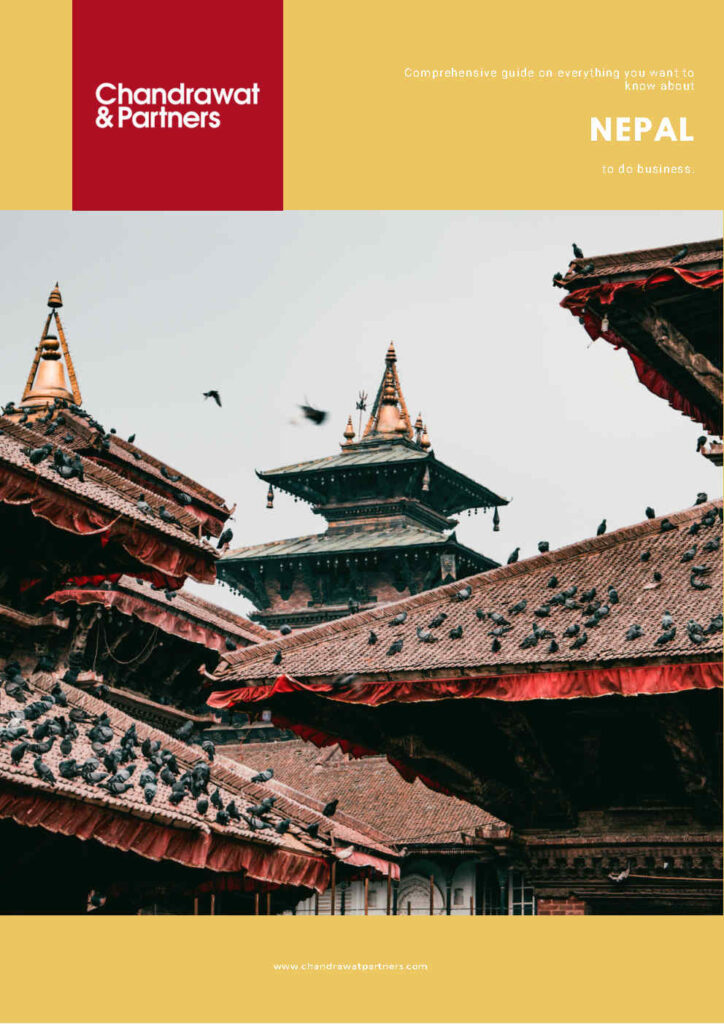 Because of its geographical and historical reasons, Nepal does most of its trade with India. However, China and the United States are also trade partners of Nepal to some extent. Further, large scale commercial activity has hitherto been in the hands of foreigners, primarily Indians.

Download our comprehensive guide on – Doing Business in Nepal

Get in touch with the right people to get the right help in setting up your business in Nepal.